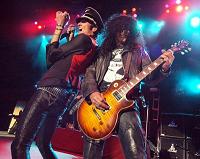 Slash: «He [Scott] didn’t know that we were already planning on extraditing him. When we started touring the second record, it just felt like we were losing Scott as far as our connection went. During the tour with ALICE IN CHAINS [in August 2007], he was just out to lunch. When he came back, he was supposed to go to rehab, so we postponed our Austrailian tour but he didn’t really go to rehab. That was the final blow. We had a lot of commitments, like the tour in the UK, which we didn’t want to go back on, so we wanted to finish those before telling him.»

On the relationship between Weiland and the rest of VELVET REVOLVER on their last tour together:

Slash: «We basically didn’t speak a word that whole time. We gave him the cold shoulder in the UK like nobody’s business. There were a couple of arguments around the stage, but other than that, nobody spoke to him. I imagine he was quite uncomfortable. No wonder he didn’t have a good time. Then he told everyone in Glasgow that the whole band was over. We were like, ‘Oh, well, I guess we’ve got a surprise coming for you, Scott.’

«For the most part, I don’t really remember seeing much of him, We flew to Dubai together, I think, when we played recently. Well, I think I remember him being on the plane, anyway. We sort of got used to him not being around. He’s never really been part of the mechanics of the group — he’s always been separate and doing his own little thing.»

On whether he thinks Weiland was threatened by Slash’s shared history with Duff McKagan and Matt Sorum in GUNS N’ ROSES:

Slash: «There was some underlying fucking theme that was going on but I’d be lying if I said I could put my finger exactly on it. I definitely get the feeling there was some sort of resentment going on.»

On whether there is any truth to the rumor that Weiland was called «J.A.» — Junior Axl — by the band behind he back:

Slash: «No, I never called him that. There were a few similarities though. What became really irritating was that I had the same problem with Scott as I had when I toured with Axl. I just couldn’t get the guy onstage on time. That I can’t accept. I will not do it again. I will not be in a situation where a guy is making the audience wait half an hour or an hour or more. It’s criminal. I don’t know who someone thinks he is when tries to get away with that sort of thing.»

On being «cursed» when it comes to working with singers:

Slash: «I know, it figures. At this point, three times charmed, right? We’re looking forward to finding a new singer, though, and we’re in a much stronger position to do that than when we started. Now at least people know what we’re doing, they know we’re a rock ‘n’ roll band and that we’re sucessful enough that you’re going to have to be on your game if you’re going to hook up with us. I just want to find this guy so we can write some songs.»